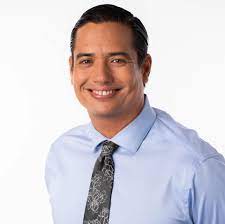 Chris Latronic is a prominent American journalist. He has been working at KHON-TV in Honolulu as a traffic reporter since August 2017. Latronic is also a producer, director, and actor. He worked at Manulele Inc. in Sunset Beach, Oahu as an editor before.  At Tihati Productions Latronic worked as  Polynesian Entertainer before that.

Latronic was born and brought up in North Shore Hawaii by his caring and loving father and mother. His father taught him how to surf at a young age. Latronic and his father used to surf at North Sow of Hawaii.

Latronic is a happily married journalist to his amazing wife. The duo is blessed to have a son named Luke.  During his free time, He loves spending with his son Luke.

Latronic attended Kahuku High School after his primary school. In 2008, Later on, he went and graduated from the University of Hawaii located in Manoa with a degree in Creative Media.

Latronic receives an annual average salary of  $71,207 per year,  according to KHON-TV anchors/reporters’ salaries.

Latronic is cheerful to enroll in the KH2 Ohana working for Wake Up 2Day as the Traffic Reporter. He knows all about a long commute by staying on Oahu’s North Shore for most of his life. To stay out of gridlock Latronic aims to help other commuters by sharing need-to-know information as well as save precious time.

He is on the road or is in the water during his free time. Latronic loved surfing as his passion and it was his work before coming to KHON2. He has been sharing surf stories on Board Stories, a locally produced television show For over ten years. At Freesurf Magazine, another surf-focused local publication he has been the Editor presently.